Sunil Chhetri and Virat Kohli recalled the infamous exchange between Venkatesh Prasad and Aamir Sohail during the India vs Pakistan World Cup match in 1996. 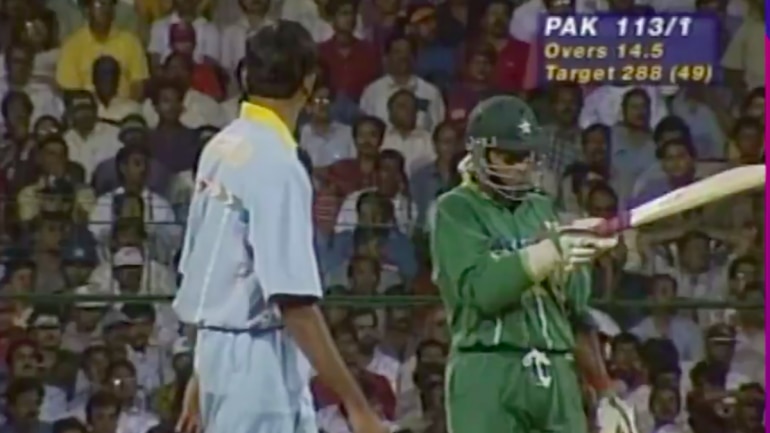 The video of Venkatesh Prasad and Aamir Sohail’s argument during the 1996 World Cup match is one of the most-watched clips on YouTube and it remains one of the most iconic moments in cricket history.

Current India captain Virat Kohli also feels the subsequent dismissal of former Pakistan captain Aamir Sohail after his heated exchange with former pacer Prasad is one of the most satisfying clean-bowled’s in cricket history.

Kohli spoke about the moment during a candid chat with India football captain Sunil Chhetri during their Instagram live session on Sunday.

“Where were you exactly when Aamir Sohail hit Venkatesh Prasad for a boundary?… trash talked… and then saw his stumps sent for a cartwheel right the next ball?” Chhetri asked.

“I was at home. I celebrated in the same manner as I do today. For me, there is no clean bowled as satisfying as that in the history of the sport. It is one of the most iconic moments,” Kohli said.

“That day, not many people in India would forget, regardless if you were a cricket fan or not,” Chhetri quipped.

The said incident took place during the second quarterfinal of the showpiece event at M Chinnaswamy Stadium in Bengaluru when Sohail hit Prasad for a boundary through the covers and then had a verbal exchange, while pointing towards the boundary rope.

The next delivery, Prasad bowled full steam and uprooted Sohail’s stumps and also gave him a send-off.

India had posted 287 for 8 on the board riding on superb knocks from Navjot Singh Sidhu (93) and Ajay Jadeja (45) and then restricted Pakistan to 248 for 9 to win the match by 39 runs with Prasad and Anil Kumble taking 3 wickets each.