Sachin Tenduklar turns hairstylist, teams up with ‘saloon assistant’ Sara to give son Arjun a haircut

World Cup winner Sachin Tendulkar and his daughter Sara teamed up to give Arjun a haircut on Tuesday. 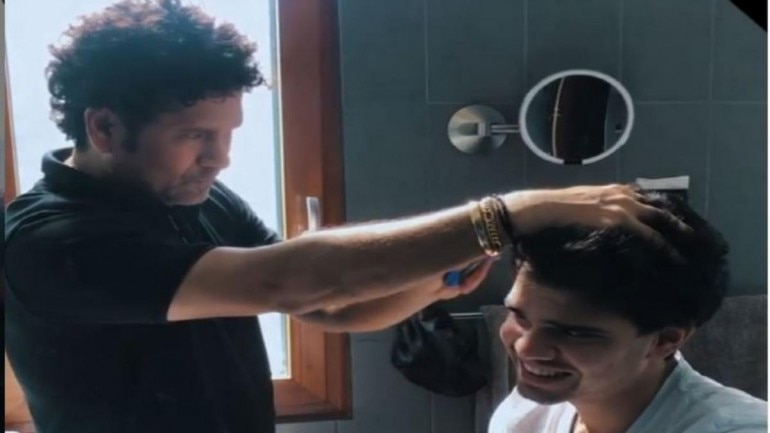 Batting great and former India captain Sachin Tendulkar turned hairstylist on Tuesday as he gave his son Arjun a haircut.

Sachin Tendulkar teamed up with daughter Sara, whom he addressed as ‘saloon assistant’ as he was seen helping his son Arjun get a new haircut.

In a witty Instagram post, Sachin Tendulkar also played it safe by telling his son that he will ‘always be handsome’ regardless of his performance with the scissors.

“As a father you need to do everything, be it playing games with your kids, gyming with them or for that matter cutting their hair. However the haircut turns out you’ll always be handsome @arjuntendulkar24. Special thanks to my salon assistant @saratendulkar,” Sachin Tendulkar wrote.

As India extended is lockdown to May 31, elite athletes have had a long break from professional sport in the country. Quite a few of them, especially India cricketers have been able to spend time with their families.

Last month, Sachin Tendulkar gave himself a hair cut as saloons and spas across the country remained closed due to the outbreak of the novel coronavirus. “From playing square cuts to doing my own hair cuts have always enjoyed doing different things,” Tendulkar flaunted his new hairdo on social media.

The batting great also shared a photo of ‘beetroot kebabs’ prepared by his daughter Sara and said they were ‘gone in 60 seconds’.

Earlier, India captain Virat Kohli also got his hair cut done from Bollywood actor and wife Anushka Sharma. Much like Tendulkar, Anushka also aced it with the scissors.