A video of the incident surfaced on social media in which the Noida policeman was purportedly seen hitting at least two women who were standing in queue for ration with his baton. 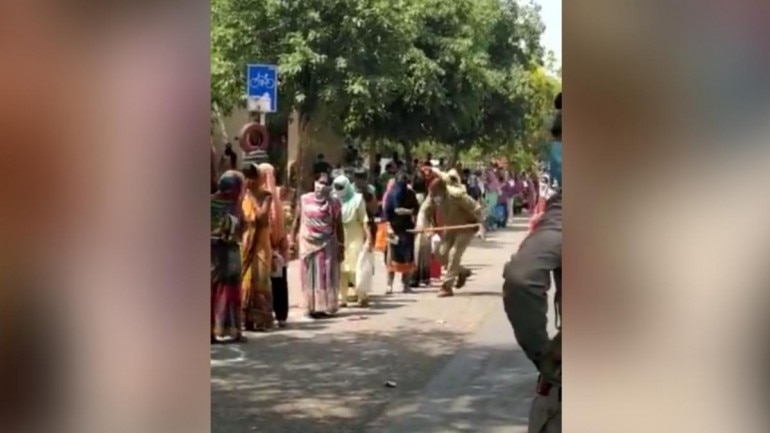 The incident took place in Sector 19 where scores of women, apparently from the lower-income group, had gathered to procure ration amid the ongoing lockdown. (Photo: Twitter)

Two women standing in a queue to procure ration were allegedly assaulted by a sub-inspector in Noida on Saturday, prompting his immediate suspension by the authorities, officials said.

Departmental proceedings have also been initiated against the policeman, according to the district police.

The incident took place in Sector 19 where scores of women, apparently from the lower-income group, had gathered to procure ration amid the ongoing lockdown.

A video of the incident surfaced on social media in which the policeman was purportedly seen hitting at least two women with his baton, even as no female personnel could be seen at the spot.

Responding to the video, the Gautam Buddh Nagar police tweeted, “Preliminary investigation has established the veracity of the incident. Sub-Inspector Saurabh Sharma was immediately suspended and departmental proceedings have been initiated.”

Earlier on May 10, a police constable deployed in Sector 22 had assaulted and hurled abuses at a man who was out on a road to fetch water amid the lockdown.

The constable, attached with the Lucknow police but here on COVID-19 duty, was immediately removed from work while Police Commissioner Alok Singh had recommended suspension and departmental action against the erring official.