Bijasen Ghat near Sendhwa town in Barwani district on the Maharashtra-Madhya Pradesh border is the main halt for migrants moving from Maharashtra to states like UP and Bihar amid the coronavirus-induced lockdown and there have been cases of stone-pelting and other law and order hiccups over allegations of lack of facilities. 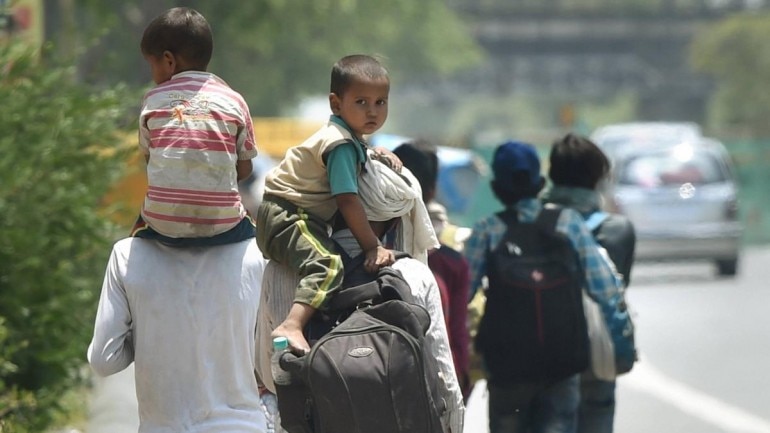 Amid stray incidents of stone-pelting and unruly behaviour over the past week by migrants amassed at the Madhya Pradesh border, a senior official from Indore on Friday said Maharashtra should send these stranded people directly to their native Uttar Pradesh and Bihar.

Bijasen Ghat near Sendhwa town in Barwani district on the Maharashtra-Madhya Pradesh border is the main halt for migrants moving from Maharashtra to states like UP and Bihar amid the coronavirus-induced lockdown and there have been cases of stone-pelting and other law and order hiccups over allegations of lack of facilities.

On a visit to the area on Friday, Indore Divisional Commissioner Akash Tripathi said, “We are making efforts at the state level so that Maharashtra can be told to send these migrants directly to their destinations in UP and Bihar by trains. Besides, Maharashtra should send them in limited numbers so that we can handle them properly.”

Queried on whether it was MP’s responsibility to transfer the migrant workers being brought to the state border by Maharashtra in buses, he said, “Maharashtra should not do this. This is not our responsibility. Maharashtra is also leaving them in the wrong places.”

He said the neighbouring state was leaving migrants from eastern MP districts like Rewa and Satna, as well as those from eastern UP, at this border, which is located on the western side.

“They (Maharashtra) should send them (migrants) by trains. This is wrong but MP chief minister (Shivraj Singh Chouhan) has taken a decision on humanitarian grounds to provide them (migrants from other states) buses because they were walking to their destinations. MP is the first state to provide transport facility to migrants of other states so that they don’t need to walk,” Tripathi said.

Tripathi said he had told Maharashtra officials to control the influx so that the arrangements can be made to send them to their destinations.

“We have limited resources. We can’t increase the number of buses from 100 to 200 in a day. We have to make Simhastha Mela-like (a massive religious congregation in Ujjain) arrangements here”.

Earlier on Thursday, the state government had said stranded people arriving at Bijasen on the MP-Maharashtra border were being transported after medical screening to Dewas transit point, from where they are being sent to Sagar, Chhatarpur, Guna and Shivpuri through buses.

Migrants from other states are being ferried till their respective borders, it had said.