Karan Johar shared a photo on Instagram with grey hair. The filmmaker wrote that he is available to play dad roles in films. Anil Kapoor had a hilarious response to the post. Karan Johar on Tuesday had a special announcement for all risk-taking casting directors, filmmakers and critics. The 48-year-old shared a photograph of himself sporting grey hair on Instagram and wrote that he is now available to play the role of a father in films.

His caption read, “I know my acting stint was scarier than the current virus but there is no harm in hoping for a second chance! So to all enterprising casting directors ,to all risk taking filmmakers , to critics with a high threshold of pain and to easy to please audiences I have an announcement to make!!!! I AM AVAILABLE FOR FATHER ROLES! ( at 48 with a poor track record I promise i can’t afford to be choosy) (sic).” Vishal Dadlani wrote, “The grey definitely looks fly, as do the glasses, @karanjohar. Not sure about the pouty-father vibe, but it could work depending on the character. I know a few people at Dharma, should I make a call? (sic)” 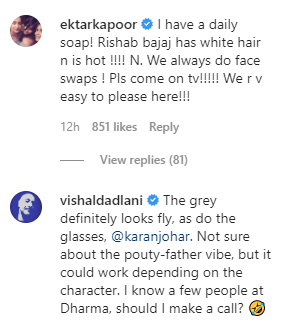 KJo recently initiated the I for India concert along with Zoya Akhtar to aid healthcare workers fighting the novel coronavirus. The concert, joined by Bollywood and Hollywood celebs, raised more than Rs 52 crores.

Asia coronavirus cases hit 250,000 but pace much slower than US, Europe