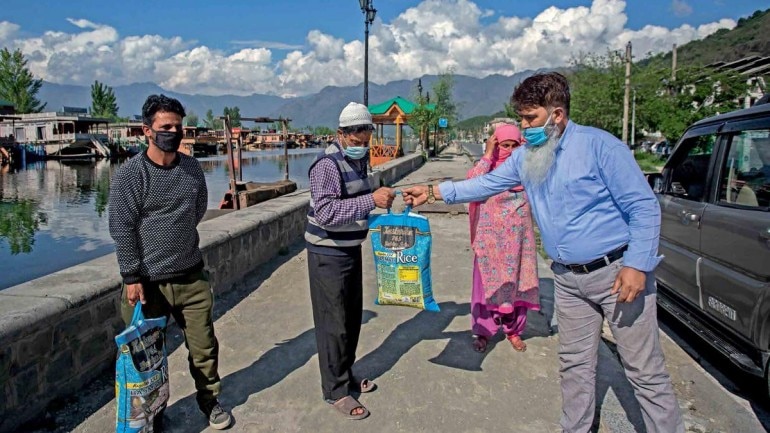 On March 18, a woman who had returned from Saudi Arabia and was hospitalised in Srinagar tested positive for COVID-19, the first such patient in Kashmir. The Srinagar district administration responded to the news with a hard lockdown. Confined to their homes, sections of the city’s 1.2 million residents grappled with shortage of food and essentials. A helpline set up by the administration to address grievances was flooded with complaints of depleting rations, particularly staple food rice.

With the 30-day period of Ramadan just over a month away, Srinagar Deputy Commissioner Shahid Choudhary set his team on the job of readying 50,000 food kits for distribution among the needy in Srinagar. Each kit has 5 kilos of rice and 2 kilos of flour, along with tea, mustard oil, spices and salt. The aim is to ensure that every family has adequate food during the holy month. The distribution was to begin on April 25, the first day of Ramadan, but the challenges of successfully mounting an operation of this scale were soon evident.

The logistics were entrusted to Imtiyaz Ahmad Bhat, junior assistant at the development commissioner’s office. The 53-year-old from Srinagar’s Batamaloo neighbourhood had just five days to arrange the manpower needed to prepare the kits. But Bhat was game for it. “Like previous instances of crisis in the Valley, I did not want to lose this opportunity as well to serve the people,” he says. “But it was difficult to procure the entire merchandise, running into hundreds of quintals, from Srinagar alone. We had to arrange for tea and some other items from the Anantnag and Budgam districts. That was made possible amidst the lockdown as the DC arranged for transport.”

Beginning April 20, five vehicles left for parts of Srinagar every morning to bring 56 workers hired for the job to the Government College for Women on Maulana Azad Road. The college was chosen for its central location and spacious halls, where the men could work while maintaining social distancing. “The workers were provided protective gear. Those days, I would sleep only a few hours. My focus was to get the food kits ready by April 25,” says Bhat.

For the distribution of the packets, the Srinagar district was divided into 25 zones. Each had an official responsible for doorstep delivery. The kits were distributed on the basis of distress calls and beneficiary lists sent by mohalla welfare committees to the tehsildars. But exceptions were also made. As in the case of a Srinagar businessman who had fallen on bad days. “Reaching his house, the delivery person called us to reconfirm. But this businessman had suffered big losses and was looking to sell his house and SUV after the lockdown,” says an official.