Home » News » Getting down to business

Getting down to business

The indirect impact of COVID-19 will be as brutal as the lives the pandemic itself might claim. One of the starker changes, already in plain view, is that millions of small establishments will be out of business, among them perhaps your favourite restaurant, the salon next door, the local tailor, the roadside juicewala, businesses that were an integral part of your everyday existence but don’t have the economic staying power to outlast this storm. MSMEs (micro, small and medium enterprises) are the lifeblood of the Indian economy, employing about 120 million, contributing 33.4 per cent of India’s manufacturing output and making up 45 per cent of India’s exports. Even so, they are also among the most vulnerable, relying heavily on day-to-day business to stay afloat and more exposed to the vagaries of demand than their larger counterparts. It goes unsaid that they have minimal reserves to dip into in times of trouble. 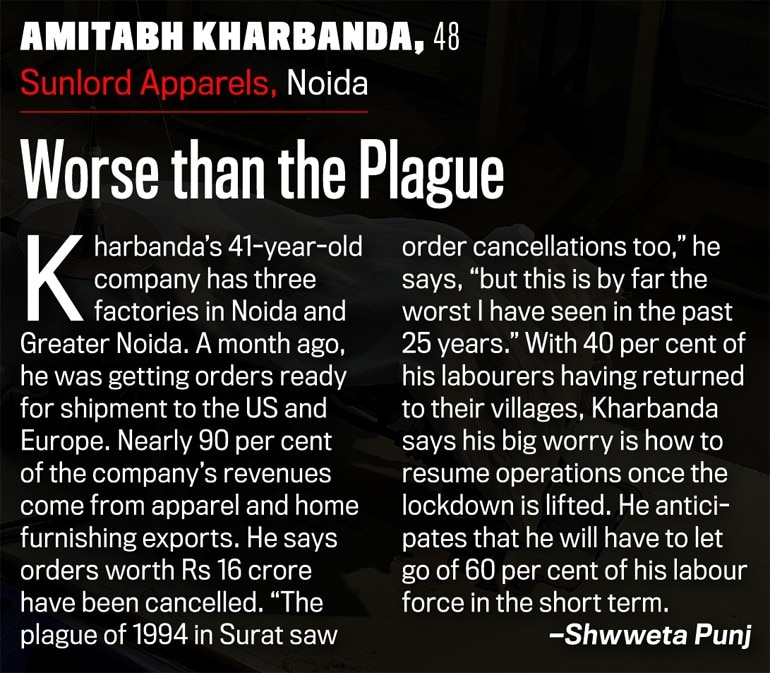 S. Jayaprasad, 49, downed the shutters of his small Mumbai-based firm on March 19, when the government ordered all private businesses closed. His firm, Michael Gunnis, exports metal parts to construction outfits in west Asia. He says the shutdown left him unable to execute orders that were to be shipped by March-end: “We are worried about our clients, and are unsure if they will continue with us after the lockdown.” He says that firms like his need immediate support in deferring fixed costs like electricity. Although he has a small team of four, he also worries about paying wages: “Over time, even [sustaining] that becomes painful, salaries form 40 per cent of our overall cost.”

The biggest challenge for small business owners has been dwindling operating capital. The lockdown has left them with a pile of expenses, utility bills, rents, salaries. On the other hand, payments owed to these units are stuck, creating a double squeeze.

Rhea Mazumdar Singhal is the CEO of Ecoware, a sustainable food packaging company that employs about 120 people at a factory in Greater Noida. Her clients include major firms like fast-food chain Haldirams and the Indian Railways. She says that payments of up to Rs 1 crore have been delayed, and that while she has managed to pay salaries for March, doing the same in April will be a challenge.

In his address to the nation on April 14, Prime Minister Narendra Modi repeated an appeal his government has frequently made to businesses since the lockdown began, that employees not be fired or have their salaries cut. But exasperated business owners ask how this is even possible. Complicating matters is that authorities have issued official notifications on the subject. For instance, in a letter dated March 20, by Kalpana Rajsinghot, joint secretary at the Union ministry for labour and employment, employers’ associations were advised to ‘extend their coordination by not terminating employees, particularly casual or contractual workers or reducing their wages’, and that ‘if a place of employment is made non-operational due to COVID-19, employees will [still] be deemed to be on duty.’

Official orders or not, business owners are running out of options. Singhal says she has no choice but to consider salary cuts and reductions in employee numbers. Others say much the same. Amitabh Kharbanda of Sunlord Apparels, a textile exporter, says he will have to let 60 per cent of his workers go, and that much of his current production run is now ‘dead stock’, textiles is a fashion-sensitive seasonal market, and having missed deliveries for this season, his stock has lost most of its value.

On April 15, businesses were given some relief. The government announced certain relaxations of the lockdown, including permitting the operations of IT and IT-enabled services (up to 50 per cent strength), e-commerce companies, courier services, industries operating in rural areas, manufacturing and other industrial establishments in special economic zones, export-oriented units, and industrial estates and townships. This has been permitted with a caveat that transportation and accommodation facilities on site must be provided for workers.

However, even as the battered sector waits for a stimulus from the government and clarifications on its notifications, the relaxations have come as a relief, and the industry is back to planning and executing post-COVID strategies. According to an assessment by the Federation of Indian Export Organisations, the relaxations will help restart about 80-85 per cent of manufacturing units geared towards exports. If these units are able to start operations by end April or early May, it would leave them in a better position to pay wages for May. Further, industries like food processing and construction and those in rural areas are all labour-intensive, and restarting them would allow migrant labourers to begin earning again. Allowing transport, warehousing and cold storage would ensure a smoother functioning of the supply chain. Steps like these are essential to India’s exit strategy from what has been the most stringent lockdown imposed anywhere in the world. In a speech in the Rajya Sabha on March 19, India’s Union MSME minister Nitin Gadkari noted the challenges facing this sector. Referring to a meeting with Union finance minister Nirmala Sitharaman and the heads of major banks, he said that credit outflow was discussed in detail. “It is true that banks [aren’t giving] loans easily,” he conceded, saying that his ministry was reviewing data of loans sanctioned at the district level. In an address to Parliament, he said the Government was underwriting bank loans to SMEs up to 75 per cent, and in some cases, even 100 per cent. “I have a corpus of Rs 10,000 crore for these guarantees, so, in effect, banks can only ask for collateral on 25 per cent of the amount,” he said.

Gadkari also said that under the government’s credit guarantee scheme, launched in 2000 to provide collateral-free credit, then with limited participation from the financial sector and a total corpus of Rs 2,500 crore, financial institutions across the board, from scheduled commercial banks to NBFCs (non-banking financial companies) have been asked to extend credit to MSMEs. On a related note, the RBI has also announced a three-month moratorium on loans, saying that all commercial, regional, rural NBFCs and small finance banks were permitted to allow three-month moratoriums on payment of instalments for all term loan EMIs outstanding on March 31.

To ease the flow of credit, the RBI has also reduced repo rates by 75 basis points (0.75 per cent) and the reverse repo rate by 90 basis points (0.9 per cent). And to ease the financial strain on employers, the Government has announced that it will fund both employer and employee contributions to provident funds, for firms with less than 100 workers and for employees earning less than Rs 15,000, for three months.

However, execution remains a major problem. A number of small business owners complain that banks have not extended the RBI’s moratorium voluntarily and that it takes a lot of negotiation to secure this relief. Also, this three-month reprieve is not a waiver, and will, in fact, accrue additional interest, which means that borrowers will end up paying additional EMIs if they avail of it. And some say the provident fund waiver, while welcome, is not substantive relief. Businesses also complain of soaring insurance premiums, saying that some payments have increased by 200-300 per cent; they have pleaded for the moratorium on interest payments to be extended to cover insurance companies as well.

Sources in the MSME ministry say that officials are working on identifying the problems on both generic and sector-specific levels. For instance, some sectors have had problems getting curfew passes during the lockdown, while others cannot possibly restart business without financial assistance.

On one frequently identified problem, paying utility bills, officials in Gadkari’s ministry say they have been in touch with their counterparts in the ministry of power. While the central electricity regulatory commission issued a circular on the waiver of utility bills, state electricity regulatory commissions have yet to follow suit. “Consumers not paying power distributing companies (discoms) but discoms continuing to pay power-generating companies will not work,” explains a senior ministry source. He also says that interventions to ease the pain are running into “unforeseen difficulties”. For instance, the State Bank of India has designed a new loan product to issue credit to existing borrowers. However, the paperwork for this requires payment of stamp duty, which is challenging, to say the least, during a lockdown. This has held up the entire initiative. Ministry sources say that they are also looking at other ways to address the problems MSMEs face, such as through the Employees State Insurance Act, under which, if a worker is on medical leave, the Employees State Insurance Corporation can be tapped to pay salaries. The corporation has a corpus of Rs 75,000 crore, which can be utilised to meet the rising demand for state support in paying wages.

“Small is beautiful. Small is powerful. Small is wonderful,” said Jack Ma, founder of Alibaba, on the future trend of businesses, highlighting the need to support MSMEs. And there is much the government can do, like relaxing NPA norms and getting banks to extend working capital loans, says Bhardwaj.

Restoring pre-COVID levels of purchase could take six months or more. And until then, businesses and workers need to brace for drastic cuts in demand, salaries and jobs. But with speedy action, the government could significantly ease the damage.

The various pain points for MSMEs and the relief sought

Government assistance has been sought for salary payments

Suspension sought of provident fund contributions by employers and employees for three months for all MSMEs. The Federation of Indian Micro and Small & Medium Enterprises says the government’s PF relief for units employing less than 100 workers and for salaries less than 15,000 will have limited impact

Waiver sought for ‘demand’ and ‘fixed’ charges for three months

An automatic extension of compliance dates for all regulatory payments, whether GST, income tax, house tax or others, to June

To spare MSMEs from being designated thus at this juncture, all measures announced by RBI to be made mandatory for banks

The Rs 8,000 per day charge that ports impose after cargo has not been cleared for three days and shipping lines after 14 days should start applying two weeks after the lifting of lockdown over and above the standard period.

How Kerala flattened the curve