Medical professionals across the globe are on the front­lines in the war against COVID-19. Earmarked on April 4 as a dedicated hospital for corona patients, Delhi’s Lok Nayak Jai Prakash Narayan Hospital is handling the largest number of cases, 780, in the city. A look inside reveals the hardships the doctors are facing, but also their steely determination to overcome the odds.

1. A doctor gets into PPE coveralls. Every building at LNJP has been converted into a quarantine facility. There are 1,500 beds, including 66 for critical care, and 45 ventilators. Each one of the hospital’s 1,000 resident doctors is on call, along with every postgraduate student, junior resident and consultant. “It is all hands on deck. We have a 14-day shift of 8-12 hours, followed by a 14-day quarantine,” says Dr Dinesh Singh. All healthcare workers have to take preventive doses of hydroxychloroquine, which can have side effects. “Most people are fine but a few have reported palpitations,” says Dr. Narang. 2. COVID-19 patients can be released only after they test negative for two tests within 24 hours once symptoms subside. There is no respite for the doctors, though. “We have a shortage of PPE kits in the general quarantine wards, especially for nurses, orderlies and sweepers,” says Dr Sarvari Damaraju, a non-PG, junior resident. “With some 60 patients in each quarantine room, the viral load is tremendous.” Doctors estimate LNJP has about 6,000 PPE kits (although there is no official count available); they have to wear a fresh set daily. 3. “I have not seen my parents or been home in three months,” says Dr Narang, who lives in Kaushambi, 15 kilometres away from the hospital. “They are both heart patients and I don’t want to be a risk to them,” says the doctor, who has been on eight-hour shifts in the ICU for the past 16 days. “Most of the patients in the ICU are old and very scared. We have been treating them based on symptoms, usually a combination of Tamiflu, azithromycin, HCQ, Augmentin and lopinavir/ ritonavir. They beg us to help them breathe, but we are helpless against the virus,” she says. 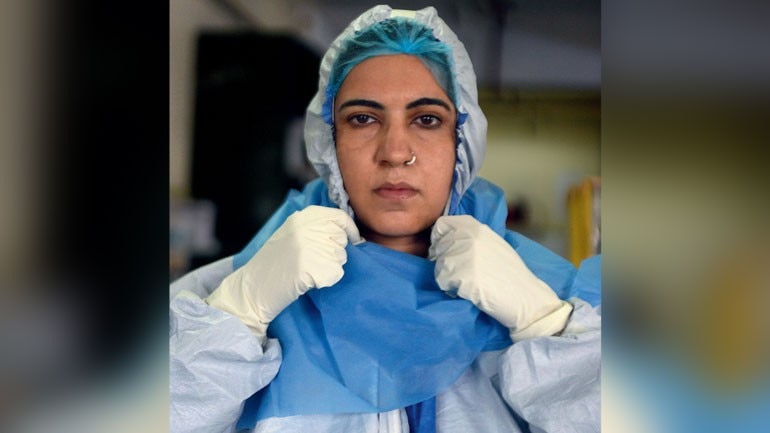 4. Patients read namaaz in an LNJP ward. “Those from the Tablighi Jamaat markaz gathering outnumber all patients. They are brought here in packed buses. The asymptomatic ones are angry to be here. There is no medication for COVID-19 unless you have symptoms,” says Dr Damaraju. Of the 1,561 positive cases in Delhi, 1,080 have been linked to the gathering in Nizamuddin. They were initially sent to quarantine facilities where they are being tested. “Conditions can deteriorate quickly, especially among the elderly” adds Damaraju. 5. A 15-year-old boy is the only minor among the 780 COVID patients at LNJP. Though asymptomatic, he has tested positive for the virus. He spends his time talking to the staff and on his phone. “He is not unwell, but I had to explain to him that he could make me unwell since I do not have protective coveralls, only a mask,” says a nurse who does not wish to be named or photographed. “Sometimes, even gloves are hard to get. I handle infected glasses, clothes, utensils. I need money for my family. I won’t get another job if I leave here.” 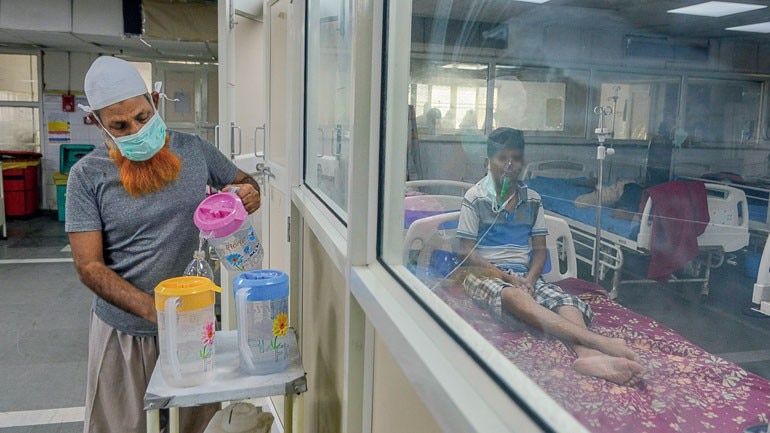 6. An LNJP doctor at the Hotel LaLit in Delhi. On completing their 14-day work period, residents and junior residents are kept for two weeks at the LaLit. Here, they catch up on their studies, speak to their friends and family and try to process the realities of their lives for the next few months. “Everything has changed for medical workers. It is mentally draining, but as doctors, we know our duty. What we need most right now is protection from assault and from infection within the hospital,” says Dr Narang. 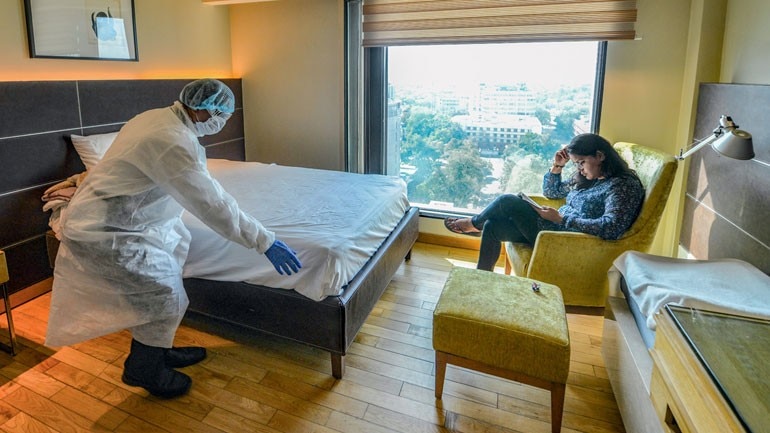 How to make the exit strategy work