Yashwant Sinha and his supporters were sitting on a dharna at Rajghat, demanding that the armed forces be deployed to help migrant workers reach their homes. 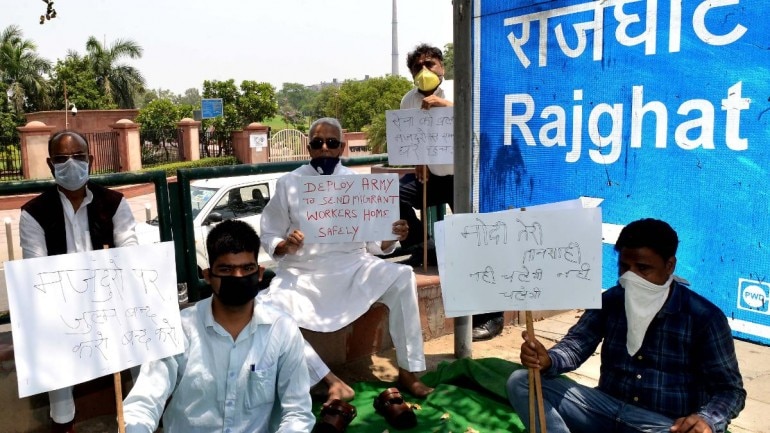 Former Union minister Yashwant Sinha has been arrested by Delhi Police. He was sitting on a dharna at Rajghat, demanding that the armed forces be deployed to help migrant workers reach their homes.

Former BJP leader informed the public of his arrested via social media.

We have just been arrested by the Delhi Police.

Yashwant Sinha, a trenchant critic of the Narendra Modi government, earlier said civilian authorities, be it the central or state dispensations, have “failed” migrant workers who have been compelled to walk on roads, with some even dying in the process.

“Our simple demand is that the responsibility be given to the armed forces and paramilitary forces that they should, with all the resources at their command and with whatever civilian resources they can commandeer, send these migrant workers to their homes with dignity,” he said.

I have started a dharna today from 11 AM at Rajghat, Delhi to demand the deployment of armed forces and para military forces to take the migrant workers home with dignity, instead of beating them up and leaving them to die on the road. Need your support.

Yashwant Sinha had said he will continue with his dharma till his demands were not met.

Others who were present with him at the protest and were arrested by the police include AAP MLA from Timarpur Dipil Pandey and AAP MP Sanjay Singh.

We have been arrested by @DelhiPolice from Rajghat, while demanding, smooth passage, with dignity, for migrants, to their home towns, too much to ask? , , pic.twitter.com/HELRN7Mgy2

(With inputs from PTI)

It is too early: Table tennis players tell federation after being asked for written consent to join training