Australian cricketer David Warner and his wife Candice danced to Allu Arjun’s Ramuloo Ramulaa song from Ala Vaikuntapurramloo. The Sarrainodu actor was mighty impressed with the couple’s dance. 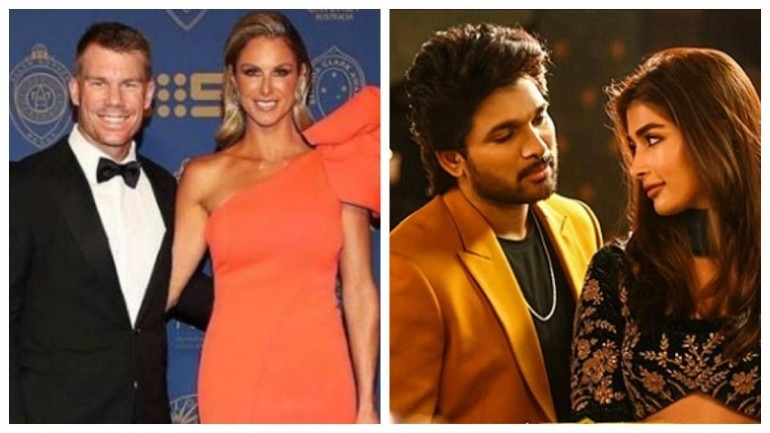 Australian cricketer David Warner and his family are back again with another TikTok video. This time, they have chosen Allu Arjun’s famous song, Ramuloo Ramulaa, from Ala Vaikuntapurramloo. The Warner duo recreated the hook step of the song and shared the video on social media.

Clad in a colourful shirt, David Warner and his wife, Candice, danced to the song along with his daughter. Sharing the video, he wrote, “He and she are back again @candywarner1 thoughts. What’s the song #challengeaccepted #next #family #fun @alluarjunonline (sic).”

Allu Arjun was taken by surprise and was mighty impressed with the Warner couple. The actor wrote, “One more bigg surprise. Thank you sooo much once again sir. Killed it (sic).”

One more bigg surprise. Thank you sooo much once again sir . Killed it https://t.co/moxijT1dY0

David Warner, his wife Candice and their three daughters are currently spending some quality time at home, during the lockdown. Apart from taking care of their kids, the entire family keep treating their fans to TikTok videos, which go viral on social media.

Earlier, they took the Internet by storm by dancing to Butta Bomma song from Ala Vaikuntapurramloo. David Warner and his family have managed to impress fans in India by choosing viral dialogues and songs from the South film industry for their TikTok videos.

Allu Arjun’s Ala Vaikuntapurramloo hit the theatres on January 12, this year, and went on to become a huge success at the box office. Directed by Trivikram Srinivas, the film stars Pooja Hegde, Murali Sharma, Jayaram, Tabu, Navdeep, Sushanth and Nivetha Pethuraj in prominent roles.