India had one of the strictest lockdown regimes in the world in its first two phases, with relaxations creeping in only after 40 days. Non-essential activities were banned and so was public transport, which restricted mobility to a great extent.

In fact, it was in Delhi that public movement was most limited among all Indian states in the lockdown period, an analysis of Google’s “Covid-19 Community Mobility Report” by India Today Data Intelligence Unit (DIU) has found.

The changes in movement towards particular locations are deviations from the baseline. Google defines the baseline as median value to the corresponding day in the five-week normal period from January 3 to February 6.

The percentage decline in public movement is measured by deviation from average mobility in the normal period. The time period DIU analysed is from March 22 (the day of janta curfew) to May 7. The full report can be seen here..

Delhi comes to a standstill

DIU took each parameter and assessed it for states with over 1,000 cases – Maharashtra, Gujarat, Tamil Nadu, Delhi, Madhya Pradesh, Telangana, Rajasthan, Punjab and Andhra Pradesh. We then compared these states with the national average and found that in all the parameters, Delhi showed maximum reduction in public movement. We will have a look at each parameter.

On an average, Delhi witnessed an 85 per cent decline in movement towards these places, whereas the national average was 79 per cent. The average decline in West Bengal, which started taking the lockdown seriously only in the second phase (i.e., after April 14), was 83 per cent.

In the first phase of lockdown, Delhi saw an 85 per cent decline in movement towards retail and recreational areas. The same was hardly 68 per cent in Bengal, which was the lowest among the states we analysed. This means that in Lockdown 1.0, movement towards shopping centres in Bengal did not decline as much as it did in the country on an average. 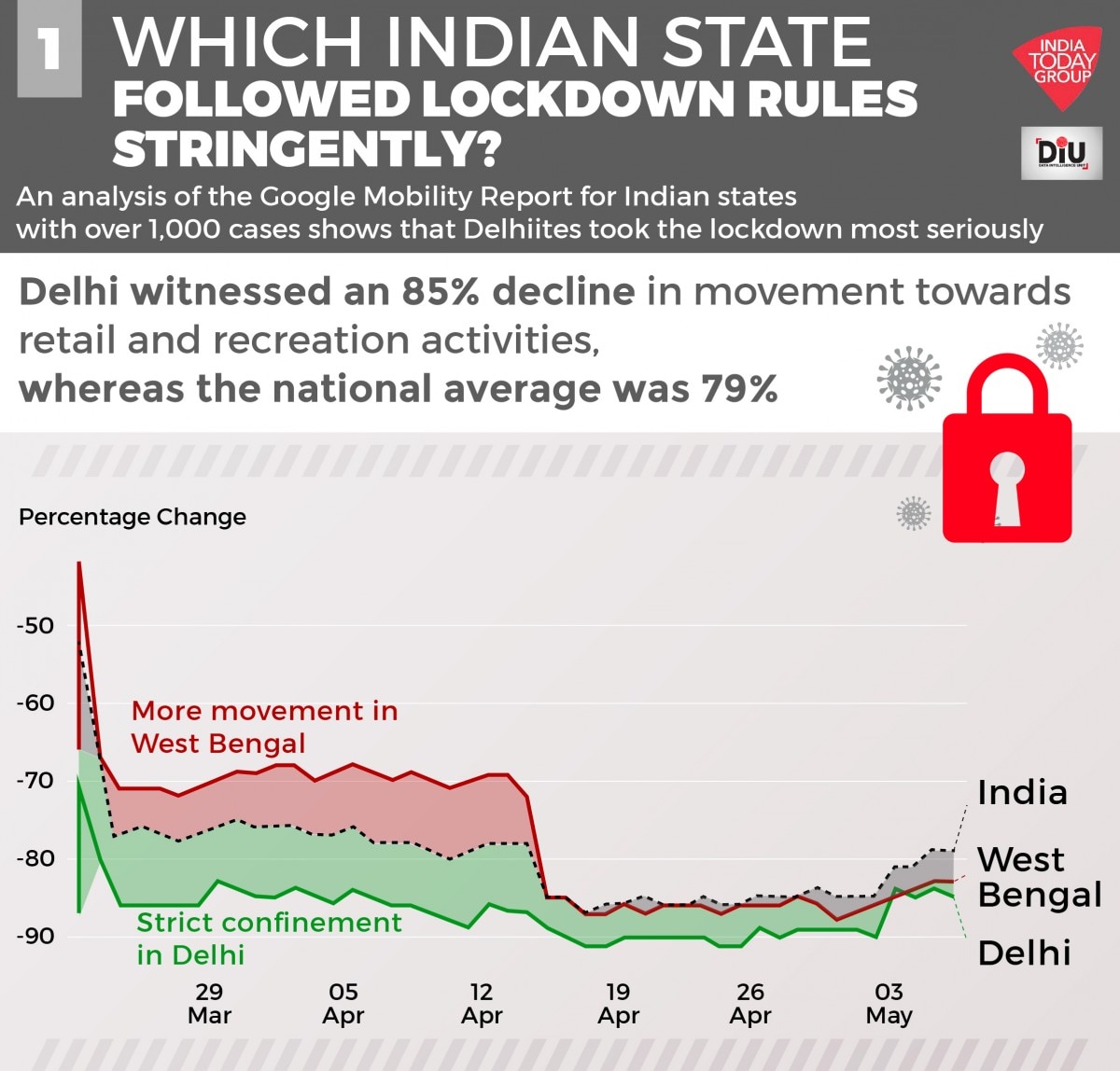 However, in the second phase of lockdown, when Bengal started witnessing a rise in cases, restrictions were severely imposed and data backs it. The average decline in movement towards retail and recreational areas in the state was 68 per cent in Lockdown 1.0 and 85 per cent in Lockdown 2.0.

The Mamata Banerjee government was accused of lacking transparency in its Covid-19 reporting. It accepted its fault only after the Centre’s intervention in the first week of May. The Centre had categorised groceries and pharmacies as essential goods and shopping for them was allowed during the lockdown. However, movement towards these shops also declined, particularly in Delhi, where the maximum decline of 57 per cent was observed against the national average of 31 per cent. 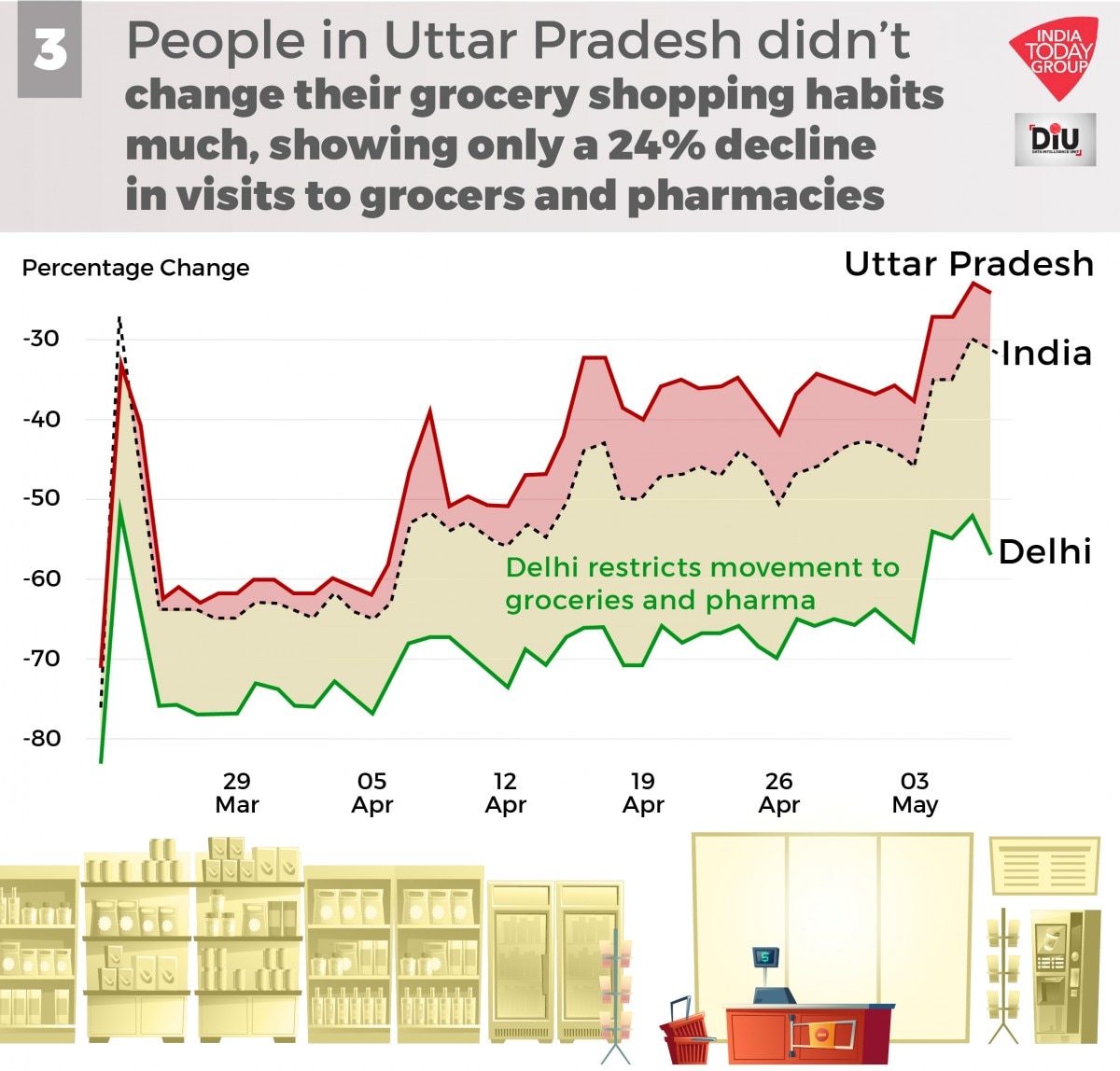 In Uttar Pradesh, the decline was hardly 24 per cent, which was the lowest among the states we analysed. This means that amid lockdown, movement of people towards local grocers and medicine shops was relatively higher in UP.

Transit stations refer to public places where people get public transport, such as bus stops, metros and railway stations. During lockdown, modes of public transport were restricted to emergency services only. Since there was no public transport, as a result, movement towards such places also came down – 57 per cent on an average. 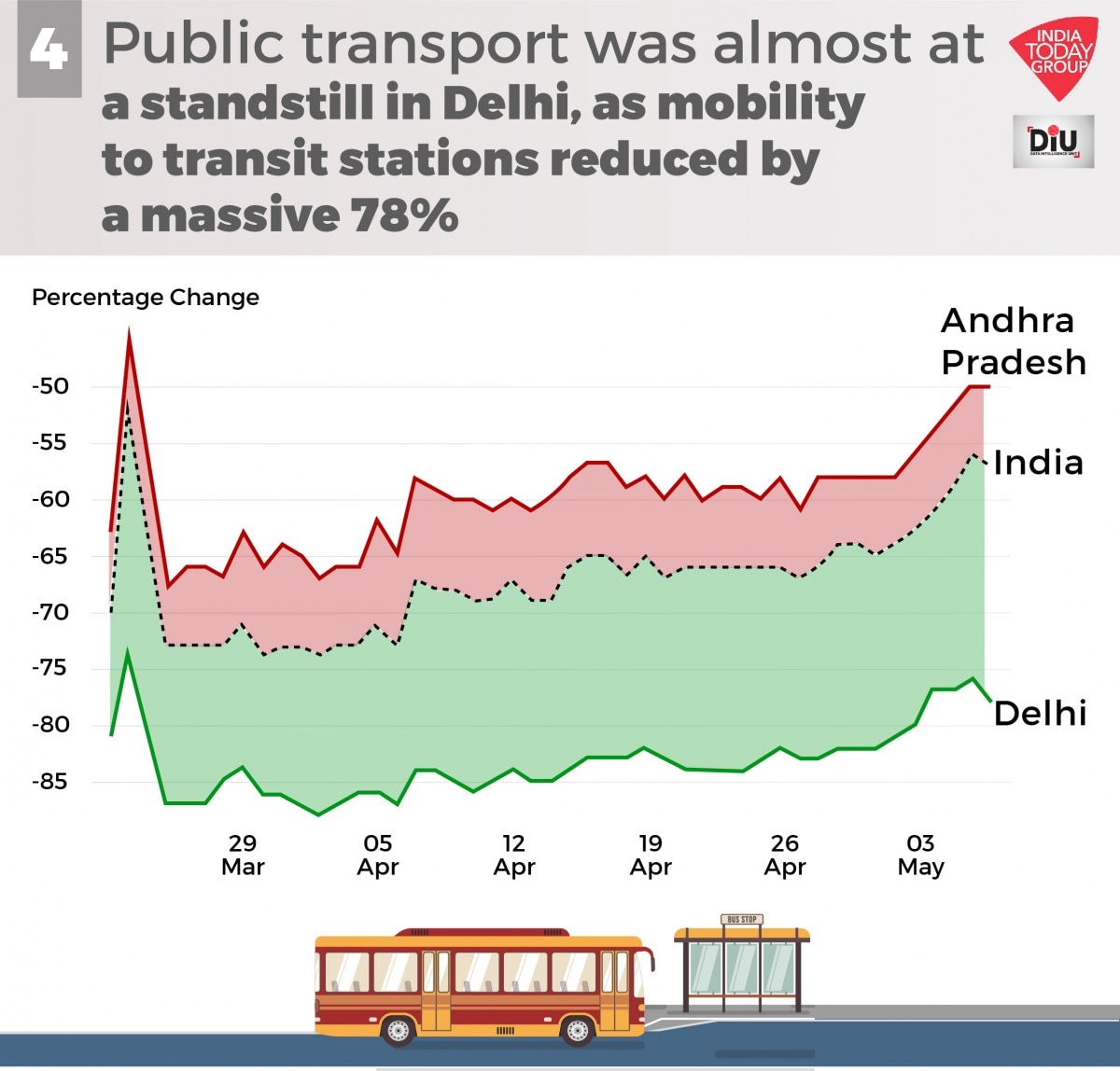 Not just transit stations, parks, where people of all age groups gather to socialise, exercise and play, also went empty during the lockdown. On an average, India saw a 59 per cent decline in people’s movement towards parks. However, these statistics should be taken with a pinch of salt since they are obtained from people’s devices. There are many people who could be out on the roads, but do not possess electronics that leave their location footprint.

Shah Rukh Khan shares lockdown lessons: Love is still worth it, no matter what anyone else tells you