According to Assam State Disaster Management Authority, two people drowned in floodwaters at Lakhipur and Balijana area in Goalpara district on Thursday taking the death toll to three. 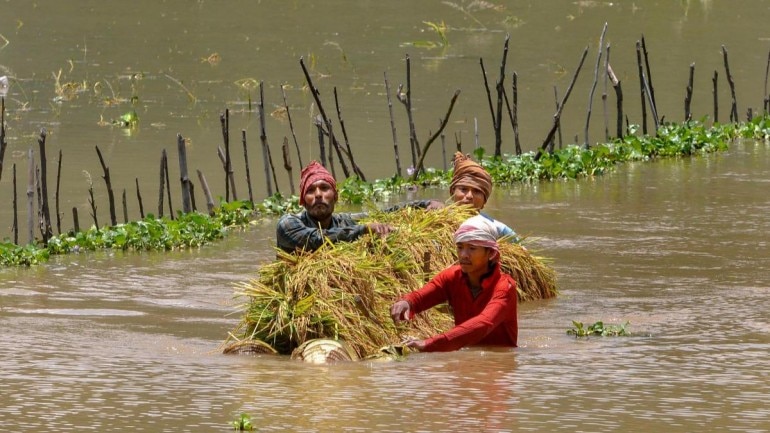 The floodwaters have submerged over 21,570 hectares crop lands in the flood-hit districts. (PTI photo)

The flood claimed two more lives in Assam on Thursday. The flood situation in the state remained grim as nearly 3 lakh people of nine districts were affected by the rising water levels.

According to Assam State Disaster Management Authority (ASDMA), two people drowned in floodwaters at Lakhipur and Balijana area in the Goalpara district on Thursday taking the death toll to three.

Over 2.94 lakh people of 300 villages in 15 revenue circles have been affected in the first wave of floods in the state.

Nearly 16,000 flood-affected people have taken shelter at 91 relief camps set up by the district administration.

Following incessant rains in Assam, Meghalaya and Arunachal Pradesh over the past couple of days, the Brahmaputra river and its tributaries are flowing above the danger level in many parts of the state and floodwaters have submerged new areas in Dhemaji, Nagaon, Hojai, Darrang, Nalbari, Goalpara, West Karbi Anglong, Dibrugarh and Tinsukia districts.

The water in the Brahmaputra river is flowing above danger level marks in Neamatighat in Jorhat district.

The water in the Kopili river is flowing above the danger level at Kampur in Nagaon district.

The floodwaters have submerged over 21,570 hectares croplands in the flood-hit districts.

The SDRF teams have rescued 492 people from the flood-affected areas of Goalpara and West Karbi Anglong district.