On May 12, when Prime Minister Narendra Modi announced the Rs 20 lakh crore economic stimulus package, he added that part of it had already been disbursed in the form of the Rs 1.7 lakh crore Pradhan Mantri Garib Kalyan Package (PMGKP), announced on March 26. Over the next two days, finance minister Nirmala Sitharaman not only gave an account of the implementation of the PMGKP, but also added some additional welfare measures to the package. The PMGKP, announced to provide relief to the marginalised sections during the

lockdown, had multiple components, direct benefit transfers (DBT) in cash, support in the form of free foodgrains, benefits for low income workers and farmers, insurance for health workers fighting COVID-19 and funds for the battle against the pandemic. Of these, cash transfers through the DBT infrastructure have seen a near-100 per cent success rate. But the implementation of the other provisions has not been as comprehensive.

Take the Rs 500 a month for women Jan Dhan card-holders for the next three months. An assessment survey in 50 districts across eight states, Andhra Pradesh, Bihar, Gujarat, Karnataka, MP, Maharashtra, Odisha and Rajasthan, conducted by the Rapid Community Response to COVID-19, a national-level coalition of 20-plus civil society organisations, found that nearly 90 per cent of the respondents had an active Jan Dhan account. However, only 66 per cent of them said they had received the cash in their accounts.

There are other issues too. PMGKP mandates that only women account-holders get the money. The exclusion of men denies the benefit to many families that need the assistance. Even the coverage among women is not uniform. A study published in April by the Yale Economic Growth Centre on the COVID-19 Pradhan Mantri Jan Dhan Yojana (PMJDY) cash transfers claims that more than 50 per cent women below the poverty line are yet to even get a Jan Dhan account.

The problem of exclusion affects the PM-Kisan Samman Nidhi (PM-KISAN) scheme as well. While nearly 95 per cent of landed farmers covered by the scheme have got the first Rs 2,000 instalment of the annual Rs 6,000 benefit (see box), the scheme does not cover the most needy, the landless labourers and tenant farmers. According to Census 2011 data, there are 143 million landless agricultural labourers in India. NSSO (National Sample Survey Office) data also shows that 14 per cent of land holdings have been leased to tenants. None of them get benefits under PM-KISAN. Even some of the eligible remain outside its purview due to poor paperwork (see Shankar Lal Jatav case study, page 45). To address this issue, Sitharaman announced that Rs 2 lakh crore in concessional credit would be offered to 25 million farmers who don’t have a Kisan Credit Card. From now on, fishermen and dairy farmers too will get these cards. To create backup infrastructure for the rural economy, the central government will also makeRs 33,000 crore available as additional emergency working capital through NABARD.

March 26, Sitharaman had announced that 800 million beneficiaries under the National Food Security Act (NFSA) would receive an extra 5 kilos of grain (wheat or rice) free for three months (April, May and June), on top of the usual allocation of 5 kilos per person. But the government’s own published status report shows that, in April, 197 million beneficiaries did not receive the additional 5 kilo quota. Besides, many were not even covered under the public distribution system (PDS). On May 14, Sitharaman extended this provision to 80 mill­ion migrants. She also promised that the much-discussed ‘One Nation, One Ration’ card, a single ration card applicable across the country, will be made effective by March next year.

The Rs 50 lakh insurance cover for our frontline Covid fighters, announced on March 28, was one of the announcements that won plaudits for the government. The ministry of health and family welfare appointed the New India Assurance Company to administer the insurance plan for 2.2 million health workers. But almost two months on, the scheme is still to be rolled out uniformly across the states. In Madhya Pradesh, for instance, doctors have yet to receive any intimation that they have been insured. The municipal corporations have sent the paper work for safai karamcharis, but have not got any response so far. The state government has now announced that the family of any of its employees who dies on corona duty will get Rs 50 lakh (it has already paid the sum in a couple of cases). Another provision that saw partial success was the free distribution of LPG cylinders through the Pradhan Mantri Ujjwala Yojana (PMUY). While in Telangana, the sales of domestic gas cylinders increased by 10 per cent in March and 29 per cent in April y-o-y, in Kerala, less than 8 per cent of the 212,381 families listed under PMUY received free cooking gas cylinders. Across India, less than 50 per cent have received cylinders under the scheme between March 26 and May 6.

When it comes to MNERGA, most states have hiked wages as provisioned in the scheme. The government claims over 40 per cent more workers enrolled in May this year, compared to the same period last year. “Till May 13, 23.3 million wage-seekers were given work in 187,000 gram panchayats across the country,” says Sitharaman. 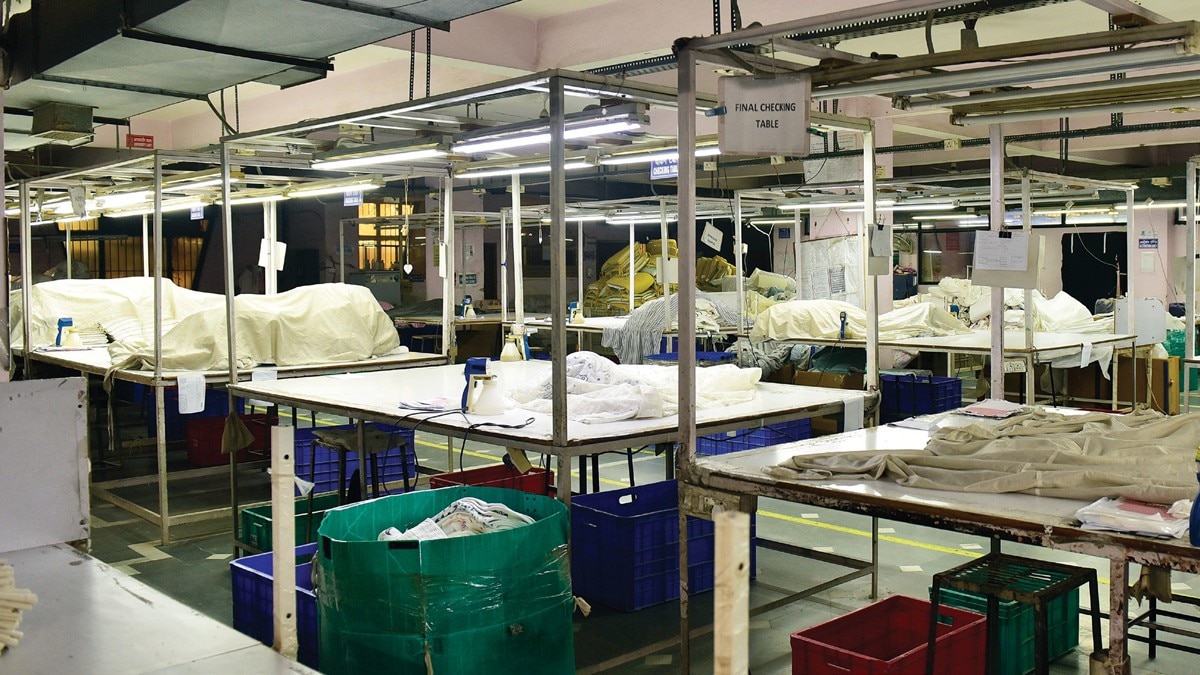 Cut pieces: The shuttered premises of garment exporters Sunlord Apparels in Noida, UP

Coming to regularised jobs, a new provision providing 24 per cent of monthly wages for the next three months in the provident fund accounts of those earning less than Rs 15,000 a month has exhibited drawbacks. For it is only for businesses having less than 100 workers, and who are at risk of losing jobs. In fact, in states like Rajasthan, this condition has led to many firms shedding workers so that they can have less than 100 workers earning Rs 15,000. The response to the provision has also not been very encouraging. For instance, in Bihar, there are 5,200 such units with 93,775 individuals working in them. So far, only 1,393 units have applied and a total of 21,286 employees have got benefits. On May 13, Sitharaman extended the provision for another three months.

An encouraging sign that distress levels among regularised workers is still not extreme is that not many have availed of the new ‘pandemic’ clause in the Employees’ Provident Fund regulations. This allows a non-refundable advance of 75 per cent of the amount or three months wages, whichever is lower. Of the 40 million eligible people, only 960,000 (less than 2.5 per cent) have availed of this offer so far. Another provision directed at rural India is the increase in the limit of collateral-free lending from Rs 10 lakh to Rs 20 lakh for 6.3 million women self-help groups (SHGs). The SHGs, under the Deendayal Antyodaya Yojana-National Rural Livelihoods Mission (DAY-NRLM), are now active in around 6,000 blocks across the country. However, the very low numbers in bank loan applications, around 9,000 in 2019-20, indicate that most SHGs may lack the capacity or credit history to be able to apply. To strengthen capacity-building of SHGs, Sitharaman now proposes to roll out the PAiSA portal, an electronic platform for processing interest subvention on bank loans to SHGs (currently functional only in Gujarat) across all states. Under PMGKY, the Centre has directed the states to utilise the Building and Other Construction Workers Welfare Fund to provide assistance to them. The government says that, so far, it has spent Rs 3,492.6 crore providing relief to 22 million of the total 35 million targeted beneficiaries. But that’s just 7 per cent of the total available fund of Rs 52,000 crore. Besides, it fails to cover the estimated 15 million unregistered construction workers in the country.

The states have also been directed to utilise funds available under the District Mineral Fund (DMF), set up with a cess collected from the mining states. The DMF is now up in 21 states and had a corpus of Rs 35,900 crore in 2019. There is no data available on how states are spending this money.

In addition to these measures, Sitharaman made announcements for other marginalised sections, such as street vendors, five million of whom will have access to credit worth Rs 5,000 crore. With the addition of Rs 70,000 crore, the credit-linked subsidy housing scheme for those earning Rs 6-18 lakh has been extended till March 2021. Those who took Mudra Shishu loans (under Rs 50,000) will get 2 per cent interest subvention with Rs 1,500 crore allocated to it. The government has also approved projects worth Rs 6,000 crore to create jobs for tribals and adivasis. 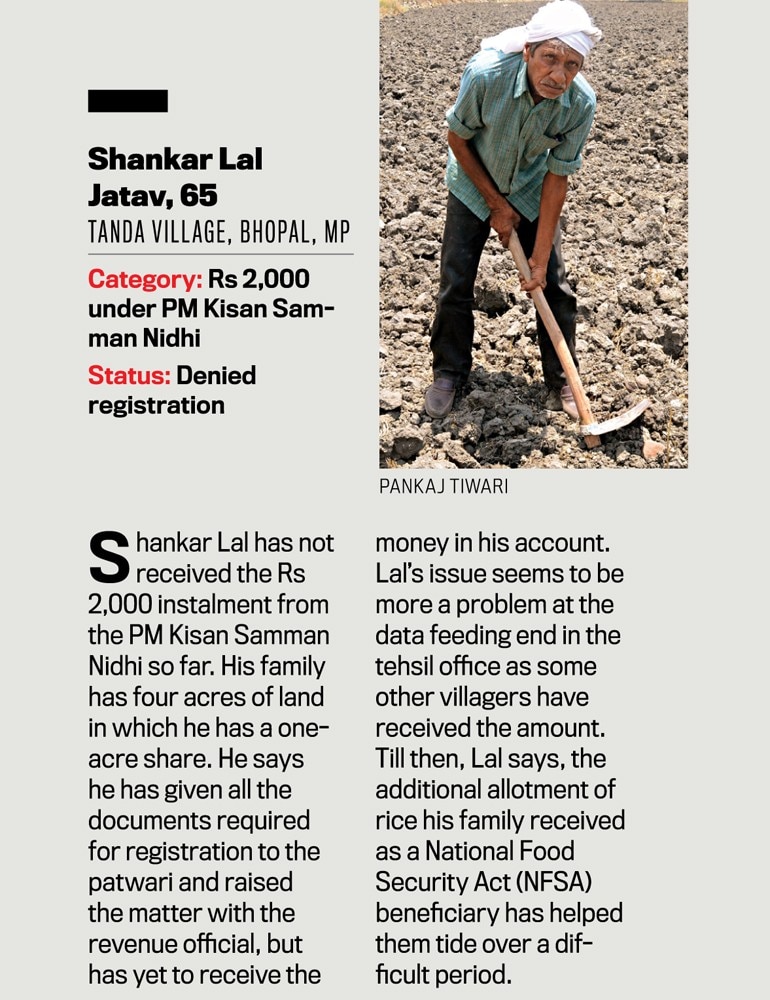 The big criticism up until the May 12 announcement of a consolidated financial stimulus of Rs 20 lakh crore was that the quantum of relief offered under PMGKY was inadequate. The proposed 10 per cent of GDP booster shot will surely take the edge of that criticism. The key task now is plugging the loopholes to ensure comprehensive coverage and implementation.