The collection features photos of Yami with writer Juhi Chaturvedi, director Shoojit Sircar along with the star cast, as she remembers her experience of her first film. She also shared a few anecdotes regarding Vicky Donor in her posts.

From how she learned to cook fish to where her introductory shot for Vicky Donor was shot, Yami’s captions are gold.

In one story, Yami shared a behind-the-scenes picture from the sets of Vicky Donor where Shoojit can be seen teaching Yami how to fry a fish in a typical Bengali style.

“My first ever fish-fry lesson, Shoojit da…(sic),” she wrote. In another post, Yami shared a note for Juhi Chaturvedi, saying, “My gorgeous fellow pahadi path-breaking writer Juhi. This was the day when we shot the scene where Aashima tells Vicky…main divorcee hoon #8yearsofVickyDonor (sic).” Yami also posted a picture with Ayushmann along with Shoojit and revealed the location of her introductory scene in Vicky Donor. While Yami and Shoojit are easily visible, we can just see Ayushmann’s back in the frame.

In her post, she wrote, “This location was our guesthouse where the entire team stayed, literally like a family…was also our bank in my introduction scene (sic).” 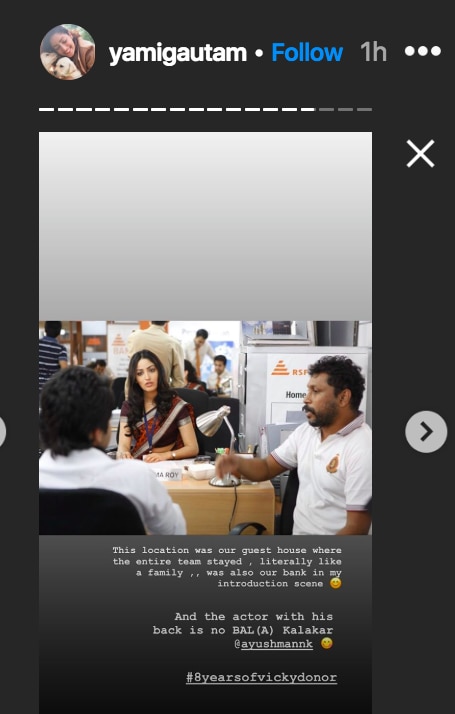 “…and the actor with his back is No Bal (A) Kalakaar,” as she tagged Ayushmann Khurrana at the end of her post.

Yami’s next post is about her experience of working with Dolly Ahluwalia, Kamlesh Gill, late actor Jayant Das and Swaroopa Ghosh, all of whom were a part of Vicky Donor’s ensemble cast. “Reminiscing Vicky Donor days is incomplete without Dr Chaddha…Annu sir was the heart of the film (sic),” Yami wrote in her another post, as she talked about Annu Kapoor. Bade dino baad Instagram pe LIVE aa raha hoon to talk about #8YearsOfVickyDonor with the one and only @ShoojitSircar! See you at 4 PM on my profile.

Vicky Donor tackled the subject of sperm donation and infertility. The film was produced by John Abraham and Ronnie Lahiri.

ALSO READ | Ayushmann Khurrana on his debut film: Vicky Donor will always be special to me