23 migrants killed, over 13 injured after trucks collide in UP’s Auraiya

At least 23 migrant labourers died after a truck rammed into the lorry they were travelling in, on Saturday morning. The incident happened at 3:30 am in Auraiya, Uttar Pradesh. 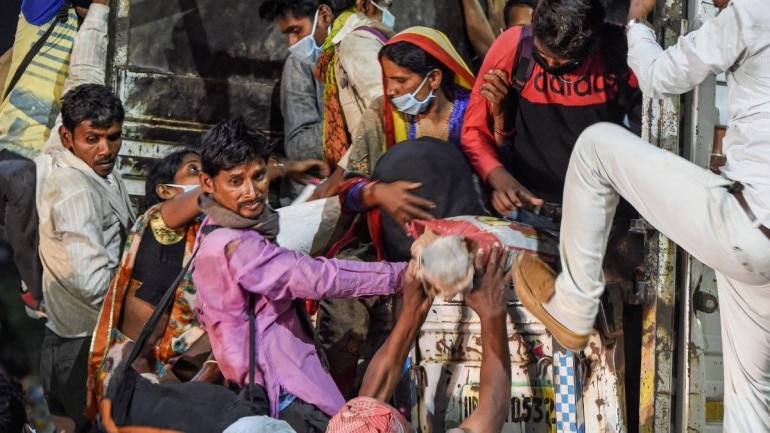 Migrants board a truck to reach their native places. (Rep photo: PTI)

At least 23 migrant workers were killed after a truck rammed into a DCM lorry they were travelling in, on Saturday morning. The incident happened in Auraiya, Uttar Pradesh at around 3:30 am when the migrant workers were on their way to their native places in different states amid the coronavirus-induced lockdown.

The road accident in Auraiya has left over 13 people injured. All the migrants — natives of Bihar, Jharkhand and West Bengal — were coming from Rajasthan.

All the injured have been taken to a district hospital and Saifai PGI for treatment. The district authorities have reached the accident site. Rescue operations are underway.

The migrant workers are among the thousands who have been left stranded in various parts of the country following the Centre’s announcement of nationwide lockdown in March to stop the spread of coronavirus.

Uttar Pradesh Chief Minister Yogi Adityanath has taken note of the unfortunate incident in Auraiya and has expressed his deepest condolences to the families of the labourers who lost their lives.

Yogi Adityanath has also directed that all the injured be provided medical care immediately. He has instructed the commissioner and IG Kanpur to visit the site and give the report on the cause of the accident immediately.

Union Jal Shakti Minister Gajendra Singh Shekhawat also condoled the death of the migrant workers in the road accident and said such incidents in the already hard times are upsetting.

On May 14, eight migrant labourers who were travelling from Maharashtra to their native places in Uttar Pradesh, were killed on the road after the container truck they were travelling in collided with a bus in Cantt area of Guna in Madhya Pradesh.

Another 55 labourers who were travelling in the truck were injured in the accident.

The group of migrant labourers were travelling from Maharashtra to Uttar Pradesh.

Also Read | 8 migrant labourers killed, 55 injured after their truck collides with bus in Guna, Madhya Pradesh
Also Watch | How migrant workers are shelling out thousands to buy spots in trucks

Beyond corona crisis, a water war between states and farmers over paddy